Jim and Tracy Stone purchased The Inn at Mitchell House in 1986. They moved from the Washington D.C. area where Jim taught at his alma mater, Sidwell Friends, and Tracy was an analyst in the Reagan White House. Their vision of raising a family while one of them was home was realized when Zach and Tory were born in 1987 & 1988. Aside from operating the Inn, Jim now teaches at Echo Hill Outdoor School and Tracy is a real estate agent with Coldwell Banker.

Read Reviews About The Inn at Mitchell House 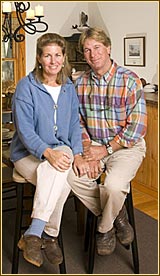 History of The Inn at Mitchell House

In 1808 Joseph Thomas Mitchell bought 200 acres and a dwelling from his mother-in-law, Mary Granger. He started adding to these 200 acres, but was interrupted in 1814 when he was taken prisoner by the British. Sometime after his release in 1817 he began building a large addition to the original house and finished it in 1825. In 1830 he died without a will so the Orphans Court of Kent County inventoried his estate. At the time of his death Mitchell had amassed over 1000 acres, owned 39 slaves and had $3,700 in cash in the Bank of Baltimore. Check out this original document of the inventory.

The property stayed in the Mitchell family until 1852 when Joseph Mitchell Jr. sold the property to G.D.S Handy and J.G Gordan for $27 an acre. The following owners, John and Annie Armburster, parceled off 30 acres to the developers of the Tolchester Amusement Park. Tolchester became the summer destination for Baltimoreans from the 1880's until it closed in 1962.

The Mitchell House was a private residence, a nursing home for a brief period and opened as a B&B in the early 1980's. Jim and Tracy bought it in 1986 and continue to operate it as an inn today.